After writing Helping the Homeless for Pukaar Magazine, feature writer Sally Jack spent the night of April 12 sleeping out for Not the Big Snooze 2013, an event organised by Leicester charity Action Homeless to raise money and support for the city’s homeless people. She goes on to write about her experience.

What does the word home mean to you? Warmth, shelter, maybe a secure place shared with family and friends.  I realised home means all of these things when I packed my sleeping bag and took part in Not the Big Snooze.

I arrived at 9pm and my bed for the night was the courtyard of LCB Depot, just as a persistent period of rain subsided.  We were offered hot drinks, soup … and cardboard. The Chief Executive of Action Homeless Rob Parkinson welcomed around 60 of us and told us how the proceeds of last year’s event had funded five emergency beds.  Until recently, Leicester had the highest number of rough sleepers outside London. Following a concerted effort this figure is now down from over 50 to 11.

I picked up two flattened cardboard boxes and looked around the courtyard. What makes a good spot? I found somewhere out of the way and ended up near the bins.  That’s when I wondered about rats.

A group of young reporters from Junior Down Not Out joined us in the courtyard, tasked with producing a newsletter overnight about homelessness.  By now I was flagging but they were still buzzing about in their bright yellow hoodies, carrying out their role enthusiastically.

Lying on tarmac was never going to be comfortable and as I stretched out in my sleeping bag I was immediately proved right. Despite the cardboard, sleeping bag and several layers of clothing I felt every lump and bump in the ground.  The glare of security lights and an unidentifiable but loud hum coming from a nearby building made it clear sleep would be unlikely. 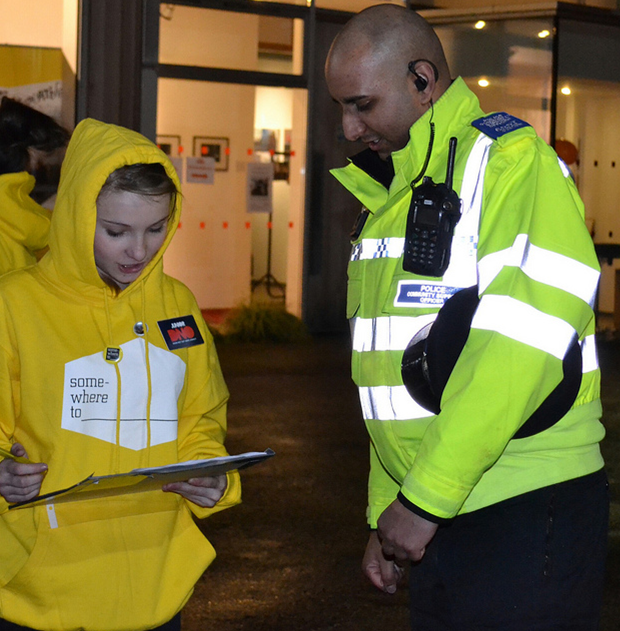 I covered my face with a blanket, which cut out the lights and kept the warmth in. I dozed at intervals but recall some key moments: wanting to go home at about 12.50am, hearing a blackbird at 2.45am, a nearby church chiming many quarter, half and full hours, clubbers sharing their enjoyment of a good night out between 4 and 4.30am. After that I gave up even trying to sleep.

Tea, coffee and porridge were provided along with access to a toilet. We were also in a secure location, which might prompt the response ‘you weren’t really sleeping rough, were you?’  No, I wasn’t, however, this gives much more of an understanding of what it feels like to sleep outside.

The event has so far raised over £4,000 and Eilidh Kennedy from Action Homeless, said: “We would like to say a huge thank you to everyone that helped make our sponsored sleep out a success this year. Although we cannot replicate what it is like to sleep rough in Leicester, we hope that Not the Big Snooze gives people an opportunity to experience a bit of the cold and discomfort that people may be faced with when spending a night on the streets. For the first time we were joined by a team of young people and it was fantastic to see their determination and enthusiasm to make people aware of the issues surrounding homelessness.

“As well as raising awareness of homelessness locally the people that took part worked hard to raise a fantastic sum of money which means that Action Homeless can continue to offer homeless people chances for change.”

I left my tarmac bed at 6am, driving home for breakfast, shower and a warm duvet.  I have now slept rough but can still only imagine what it is like to be homeless.

Find out more about the event and how you can help the homeless at www.actionhomeless.org.uk

Pictures by Junior Down Not Out reporter Lia Oakley.

Searching for the stars of tomorrow