We celebrate the 70 year history of Walkers and find out how a simple slice of fried potato became the nation’s favourite snack food.

The much-loved Walkers crisp was born in Leicester in 1948 thanks to English butcher Henry Walker. It was during the post-war rationing that he saw his factory output drop dramatically, so his company, Walkers & Son, started looking at alternative products to keep the business afloat. Henry decided to shift the company focus and began hand-slicing and frying potatoes to make crisps. Sprinkled with salt and only threepence a bag, they were an instant hit with the people of Leicester. 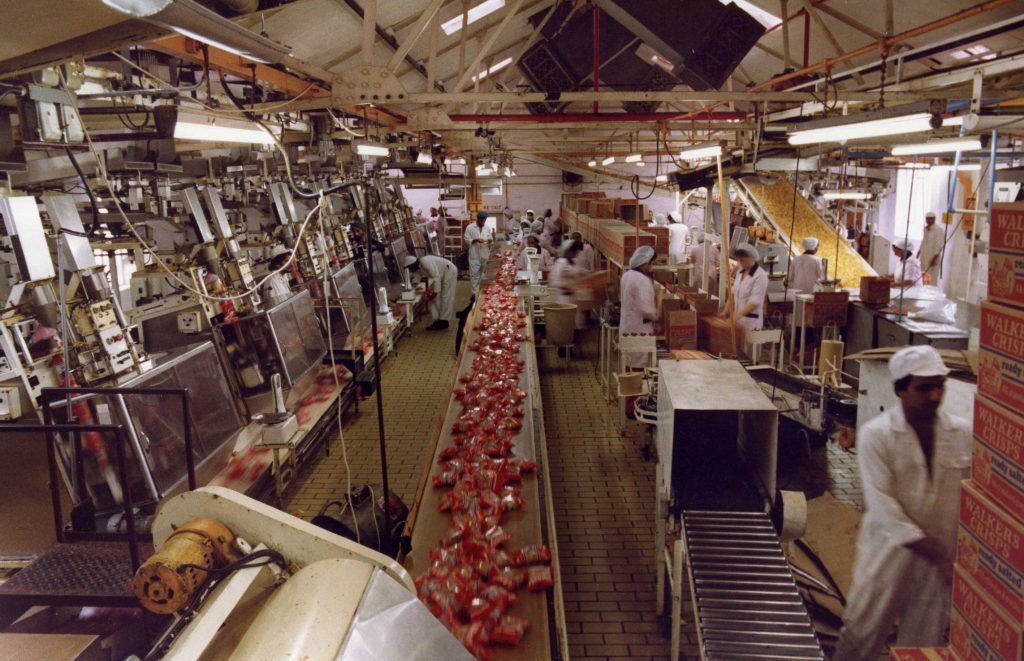 Although meat rationing ended in 1954, the business continued to make the popular snack – but they were about to get a lot tastier. The development of a new technology, which allowed seasoning to be applied directly to a crisp, enabled Walker to add new flavours to the mix. It was the popularity of ploughman’s in the 1950’s that inspired him to introduce the Cheese & Onion flavoured variety– a firm favourite still to this day.

The 70s paved the way for even more exciting flavours, including Salt & Vinegar, Prawn Cocktail and Roast Chicken, which also took inspiration from other beloved British dishes.

In 1982, Walkers took off, so much so, they opened the largest crisp factory in the world in Leicester. Today, seven million bags of crisps are made there every single day. They also own multiple sites throughout the UK and employ 2,700 people across the factories in Leicester, Lincoln, Skelmersdale and Coventry. They work with more than 300 farmers across the country to produce the very best, sustainably grown potatoes, from Lady Rosetta to Saturna.

1989– Walkers had found a home at PepsiCo.
1992– Foil packaging was introduced to ensure the crisps stayed fresher for even longer.
1994– Walkers was introduced in Scotland and quickly overtook Golden Wonder to become the number one brand in Scotland too.
1995– Gary Lineker becomes the face of Walkers
2000- On St Patrick’s Day Walkers expanded to Ireland.
2002– Victoria Beckham launches Sensations, the new ‘Posh’ crisps.
2002- The first limited flavours were introduced including Marmite, Heinz Tomato Ketchup and Branston. Marmite then became part of the permanent line-up of flavours.
2007– Saw the launch of the Oven Baked variety, made with 70% less fat.
2008-9- ‘Do us a flavour’ competition launched. Limited-edition flavours included Builder’s Breakfast, Onion Bhaji and the more outlandish Cajun Squirrel.
2011– Sunbites launch.
2015- Mixups launch– a combination of childhood favourites – Doritos, Monster Munch, Wotsits and French Fries all in one bag.
2017- Walkers became an official sponsorship of the UEFA Champions League.
2018- Poppables launch. Flavours include BBQ Ribs, Cheddar Cheese and Sweet Chilli.

It was over a decade ago that Walkers became receptive to the more health-conscious. They removed over 70% of saturated fat by switching to healthier oils such as sunflower or rapeseed oil and removed 25% of the salt content. They have continued to invest in ways to reduce the salt and calories in their products, becoming one of the first companies to sign up to the Department of Health’s Responsibility Deal 2017 salt targets.

The popular brand has also created a number of lighter options in response including Oven Baked and Sunbites, which are available in a range of delicious flavours. Walkers has pledged to make its crisp packets 100% recyclable, biodegradable or compostable by 2025.

2016 was a year to remember in the hometown of Walkers when Leicester City Football Club won the Premier League. In honour of the clubs victorious win, they created exclusive ‘Salt & Victory’ branded packets. The special edition packets were not made available in shops – instead, they were made especially for Leicester City supporters and were given for free as part of the city’s celebrations.

It’s been an incredible journey so far and who knows what the next 70 years have in store!