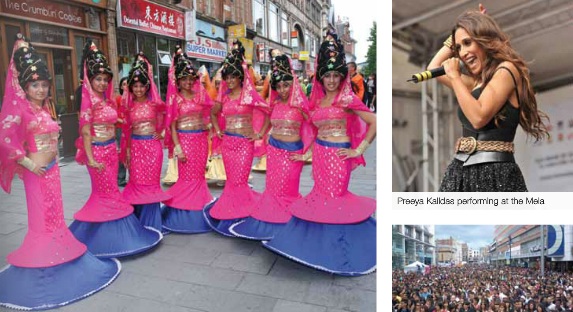 While the entire country is getting mixed up with the olympics, Leicester is hosting other popular celebrations such as all-time favourites caribbean festival and belgrave mela to make sure its people have a summer to remember.

Famous for being the first event of its kind in the UK, Belgrave Mela is opening its doors one more time, not just to the Asian community, but to all of the different ethnic groups that make up the city of Leicester

Belgrave Mela 2012 will see new faces like Leicester’s very own Desi Masti, and other acts such as Nupur Arts and Kuntal’s School of Bollywood Dance.

Families will have the chance to enjoy a variety of traditional activities while learning about South Asian Culture as professional artists lend a hand in fine art printing, painting and literature workshops.

South Asian spices will fill the streets with their aromatic scents, and traditional Indian snacks and sweets will be available from the Mela Baazar in Leicester Market, which will also feature a mix of fashion, jewellery, arts and toys.

Caribbean festival
Thousands of spectators will dust off their most flamboyant costumes and join the street parties and cavalcades to celebrate with glamour and glitz the 27th Caribbean Carnival, which takes place on Saturday 4 August. This year, the festival goes with the theme of

The Carnival will start with events in Victoria Park from 11am and continue with an electrifying march of spectacularly colourful costumed groups dancing to brass and steel rhythms while winding their way through the city’s central avenues.

Plenty of activities, from live performances and fun fairs, to crafts and food markets will be running at Victoria Park throughout the afternoon to display Caribbean cultural identity and social cohesion.