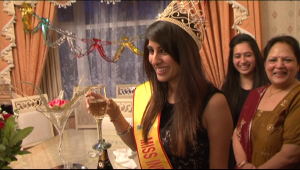 A Leicester beauty therapist has been crowned Miss India Worldwide after wowing judges with her beautiful Bollywood dancing, despite being unable to hear music.

Nehal Bhogaita, 24, from Abbey Lane, Leicester made history as she fought off stiff competition from 40 finalists to become the first ever deaf winner of the global beauty pageant. Speaking to Pukaar News, she said: “I was so shocked but feel really happy and proud because I’ve done it, I’ve broken the barriers.”

The Miss India Leicester and Miss India UK communicates using sign language and lip reading skills. Her bubbly personality shone through with the help of her sister Jayeesha, 19, who interpreted her answers to the judges.

It was Nehal’s stunning dance skills that won the hearts of the judges. She performed a routine representing how she has overcome the obstacles in her way.

Remarkably Nehal feels the vibrations of the music through her feet, which enables her to keep in time with the music and dance to the rhythm. Her passion for dance began at the age of 11 when she attended her first dance class after being inspired by the Bollywood dancers on television and in films.

“I love Bollywood dancing, it has been my dream,” Nehal said. “I’ve always wanted to be in Bollywood films with actors, I want to act and dance.” 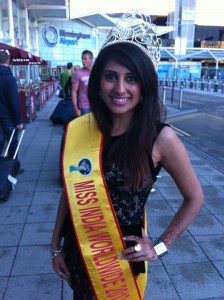 When she isn’t professionally pampering people with massages, facials and manicures, Nehal works with Action Deafness as a support worker visiting other deaf and hard of hearing people. For two years, she has been helping clients build up their confidence by accompanying them on trips out and helping them adapt to living in a frightening world without noise.

Having participated in a number of fundraising activities already, with her next adventure Nehal hopes to raise £10,000 for both Action Deafness and Cancer Research by doing a nail biting sky dive in the summer.

Nehal hopes that her achievements and good spirits in the face of adversity will inspire other people with disabilities to conquer any hurdles that are in their way. She added: “I want to say to all deaf people: you can do what you want to do in your life. Make your dreams come true. Dream, believe and achieve.”