“Ladies and gentlemen, it is the academic conclusion of the University of Leicester that the individual exhumed at Greyfriars in September 2012 is indeed Richard III, the last Plantagenet King of England.” 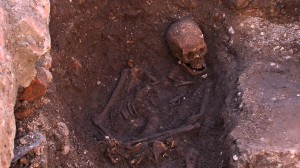 At a packed press conference on Monday February 4, 2013 these historic words, spoken by Richard Buckley, archaeological lead in the search for Richard III were met with cheers from the world’s media.  After nearly six months of painstaking scientific analysis, evidence was presented detailing the results of DNA testing, radiocarbon dating and skeletal analysis, all of which confirmed that the bones buried for over half a millennium in Leicester city centre were those of a king.

The University of Leicester, in association with Leicester City Council and the Richard III Society, led the Search for Richard III. It began on August 25 2012, exactly five hundred and twenty seven years after Richard’s battered body was buried in a grave in Greyfriars, dug hastily and too small for his 5ft 8in frame.

The search included teams from the university’s archaeology and ancient history department, forensic pathologists, forensic engineering experts and the department of genetics.

Professor Lin Foxhall, head of the School of Archaeology and Ancient History said: “Archaeology is a team effort. No one person could dig up the whole site. You need people who have expertise in very different things – and each different person with their specialist skill can add to the picture.” 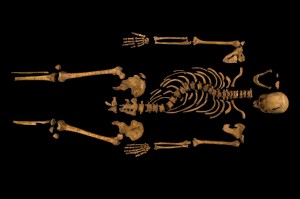 The bones were initially laid out on the scanner as close as possible to the anatomical position in which they were found. After the initial analysis of the images, a further scan of the bones was taken in order to reconstruct the images making a ‘virtual’ three dimensional model.

Dr Campbell, consultant radiologist and divisional director for clinical support at Leicester’s hospitals said: “We were delighted to be asked to help in this exciting investigation. Last year Leicester Royal Infirmary celebrated 100 years of being ‘Royal’ and it was wonderful to have Royalty in our imaging department in such an unusual way!”

An exhibition allowing visitors to find out more about the Search for Richard III will be open to the public from 10am, Friday February 8 at Leicester’s medieval Guildhall.