August 2012 marks the 40th Anniversary of the exile of the Asian community from Uganda. Meera Majithia talks with the Ugandan Asians who survived Idi Amin’s regime and made Leicester their new home.

Imagine waking up one morning to discover you’ve been ordered to leave behind your home, your entire life savings and simply wrap up your life and crush it into the tiny space provided by a few suitcases- all in 90 days.

This was the plight faced by thousands of Asians as Idi Amin ordered their expulsion on August 4 1972. Forty years on from this tragedy, some of those individuals, who went on to settle in the city of Leicester, share their experiences.

In ‘Uganda: A Modern History’, Amin is quoted as saying: “We are determined to make the ordinary Ugandan master of his own destiny, and above all to see that he enjoys the wealth of his country. Our deliberate policy is to transfer the economic control of Uganda into the hands of Ugandans, for the first time in our country’s history.”

He was hailed by some as a ‘mad man’ and by others as a ‘ruthless dictator’. But either way, Idi Amin wanted to take hold of his country’s destiny and fortune by getting rid of the entrepreneurial Asians, who he believed controlled the economy. It is estimated that they left behind over £1.5 billion worth of assets, in what is simply described by many Ugandan Asians, as a great big ‘loot’.

Over 40,000 people were expelled in 1972 and out of the 25,000 who came to Britain, around 6,000 are believed to have settled in Leicestershire. Ironically however, an advert was printed in the Uganda Argus asking the Asians not to come to the city.

Originally from the town of Masaka, Manzoor Moghal now lives in Leicester and is the author of ‘Idi Amin: Lion of Africa’. Speaking about the expulsion, he said: “It may have been a surprise for people who were not aware of what was going on in the country politically. It was a surprise in the sense of timing, but we knew that the Asian community in Uganda had no future and that they would have to leave the country.“He (Amin) was against the Asian community, because from his viewpoint they controlled the trade and the commercialisation of the country, both at the distribution level and also at the manufacturing level. He wanted to get rid of them for one purpose – to get the loots from them and distribute the loot to all of his supporters, who were mostly in the armed forces.”

Mr Moghal, who was involved with his father’s motor trade business in Uganda, was also very active in Ugandan politics. He took up roles as the town councillor and deputy mayor and even acted as the mayor on a number of occasions. He had met Idi Amin on a number of different occasions both professionally and on a more personal level at events held by the Muslim community.

He added: “He was a likeable character when you first met him. If he thought you were a person of some substance worth talking to he would be very friendly with you. He had a particular knack of disarming you with his laughter and congeniality and his embraces. But he was very dangerous and would kill his enemies – not himself –but have them killed if he felt threatened by anyone.”

Mr Moghul was present during negotiations by Amin and the British High Commissioner, who he describes as a ‘useless lamb’. He believed Amin to be a perfectly healthy and an absolute sane man, with any reference to being ‘mad’ simply being a tool of British propaganda.

Being one of the men on Amin’s hit list once the expulsion was announced, Mr Moghul was forced to flee the country in the middle of the night along with his wife and two children, which brought him to Leicester. He added: “I have now become British – Uganda is not my home now. I look at Uganda as a part of my life, which is in the past.”

At the age of 97, Ramji Punja Thobhani, who was born in Bombay and moved to Kampala at the age of 14, is thought to be one of the oldest Asian survivors from the country. He ran his own textile factory and clothing shop in Kampala and came to the UK when the expulsion order was announced, as two of his sons were already in the country, studying. 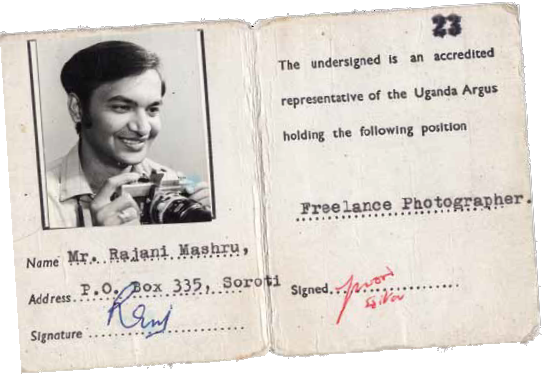 He stayed in a camp for about a week along with his family before moving to stay with relatives. He then went on to rent his first home, and in true Asian entrepreneurial spirit, a shop to get the family back up and running.

Speaking about the British hospitality upon arrival to the country, he said: “We are very grateful to the British government for giving us such great service and providing us with clothing and food.”

However times were hard. With hardly any money, a big family to support and tense racial relations to shrug off, Mr Thobhani says it was a struggle to get the family business up and running. But 40 years on he is happy and leading a comfortable life. He’s returned to Uganda four times since expulsion, and on his last visit in 2007 was thoroughly impressed with the developments that have occurred, in particular with housing and infrastructure.

The Asian population were always business minded and contributed to the Ugandan economy, and they continued to do the same on arrival in the UK.

From the town of Soroti, Majithia brothers Pravin, Shantilal and third brother Mahendra, who has sadly passed away, arrived in the country with just £55, but have since gone on to develop a hugely successful petroleum business.

After scrimping and saving from working in various factories and shops, the family got lucky with a lottery win and were able to buy a house and car, and eventually their first petrol station. After slowly and steadily building up the business, they now employ over 100 staff, and according to Forecourt Trader 2012, they are rated as the number one independent fuel retailer in Leicester.

Describing the moment they heard about the expulsion, older brother Shantilal said: “It was shocking. At the time we thought he’s (Amin) just mad and it’s not a reality. Then we realised this is true and everyone has to leave. We were only allowed to take one suitcase and there were military checkpoints everywhere.

“Our daughter was only 20 days old at the time and while driving from Soroti to Kampala, we hid some jewellery under her cot but that was it. When we got here it was very difficult. It was so cold and we had no car, barely any money and no food. But we were lucky as we had a relative to stay with. There were 14 of us staying in the house at one point.”

Similarly, someone else who has gone on to establish himself in his field is Rajni Mashru (known as Maz Mashru) of Maz of Leicester. Also from the town of Soroti, he was the only official Indian photographer working for the government and the only Indian photojournalist working at a high level for the Ugandan Argus. In addition to this, he also ran his own photography studio.

Speaking about his time in Uganda during the dreadful 90 days, he said: “At that time I had a British passport and was not a Ugandan citizen, so I had to go and have my status verified. We had to be exhibited to the Africans, to the public in Kampala in the hot sun and rain and wait for hours for our turn to go into that office before we could get a clearance for our nationality. It was humiliating.

“I heard stories of other humiliations including people being beaten. There was one incident where a woman had been raped and so many other different stories coming though. We werejust happy to have come out alive.”

His brother was already in the UK, but on arrival Maz resided at a camp in Somerset along with his wife and sister. He said he was determined not to be a burden on the country and got a job selling cameras in London. A transfer then led him to Leicester, and once he felt there was no scope for promotion, he set up his own studio on Belgrave Road in 1975, and he has been there ever since.

These accounts are just echoes of the thousands of stories that remain to be told. And to commemorate 40 years since the Asians were forced to leave Uganda, Leicester is holding various events across the city. From July 14 to September 30 there will be an exhibition held at New Walk Museum and Art Gallery, titled ‘From Kampala to Leicester:

The Story of Leicester’s Ugandan Asian Community, 1972-2012’. You will also get a chance to have a look at historical audio and visual archives on the topic at the same venue on July 23.

Finally, on August 7 Dr Pippa Virdee will be leading a talk titled ‘Ugandan Asians in Leicester: ‘From Refugees to Citizens’ at De Montfort University.