YOUNG AND ESTEEMED DIRECTOR SUBA DAS OPENS UP ABOUT HOW HE GOT TO WHERE HE IS TODAY, HIS INCREDIBLE EXPERIENCES AND HIS DETERMINATION TO MAKE THEATRE THRIVE IN LEICESTER

Suba Das has been Associate Director at Leicester’s Curve for two years now, and he fondly describes the building, his workplace, as “inspirational, an iconic statement that says culture matters to us.” Speaking to Mr Das it is hard not to view him, and his work, as inspirational too.

His role bridges the gap between the theatre and local artists at every level, playing an integral part in supporting creative talent so that new work emerges within the region. “A big part of my job is identifying and solidifying the resources and pathways available here at Curve. You only develop by being able to do, so it is important that local people can create new work by making mistakes and testing things out.”

The son of North East Indian parents, Suba’s father moved to the UK in the 1970s to forge a better  life for his family. He split his time between here and India until his wife could come to Britain, where Suba and his twin were born. Speaking about his childhood, Suba said: “It could be described as impoverished – my dad passed away when I was ten and my mother brought us up on state benefits, but I think children are very resilient. We didn’t sit around saying ‘Oh my god our lives are awful!’”

Suba’s late father instilled in him a love of literature, and he was fortunate enough to study at two outstanding establishments: the Royal Grammar School and Cambridge University. He read law, but defected to English in his second term because “If I was going to do that much reading, I wanted to read stuff that had better storylines!” 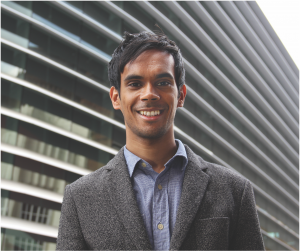 His passion for theatre began at school, but really took hold at Cambridge, where he did student amateur dramatics. “At Cambridge it was very much about letting the students get on with it, so we had to learn practically about producing, marketing, how stage managing works how scheduling works, all these things that are fundamental to creating theatre – I was lucky to get a really hands-on experience.”

Having graduated with the theatre spark lit, Suba claims that he “blagged my way onto a director training course in London, working every weekend to fund it.”

The hard work paid off, and his first professional job was at the Theatre Royal Stratford East, a culturally diverse place that felt similar to where he grew up in Newcastle. This shift from the refined academic atmosphere at Cambridge was like a homecoming that inspired Suba to make theatre that these audiences could actually connect with.

He put on a production of Medea in Stratford, which got him noticed by leading industry professionals, and his career reached new heights when he was appointed the youngest ever director-in-residence at the National Theatre Studio. Tasked with contacting emerging artists and letting them use the Studio’s facilities, Suba describes this as a life- changing experience that impacted on what he does today: “My work there has instilled the belief in me that we need to have space for people to test and play and explore, because if we offer that then really ground-breaking work can be created. There is a clear link between the opportunities I had at the National and what I’ve built here at Curve.”

He has also made excellent work in his own right, and his love for classic texts combined with a keen interest in pop culture (including a unapologetic adoration of Madonna)  led to the creation  of a site- specific Shakespeare trilogy, including an adaptation of The Winter’s Tale set in a five-acre forest hidden behind King’s Cross Station.

“I wanted to take these classic stories and use modern techniques to stage them. A lot of people think theatre is just about high art, which can feel very distancing- I think part of The Winter’s Tale’s success was that first and foremost it was about a really interesting and great night out!”

Site-specific work remains a passion, and Suba is currently directing Curve’s autumn drama, a production of Abigail’s Party by Mike Leigh. “It will be Curve’s first show in the round – I wanted to find a way to push boundaries like I have always done, and to give people a new experience of a play that many audiences are familiar with. It’s a terrifying thing to take on such an iconic piece but we will use the amazing resources and brilliant technical team to totally transform the space.” 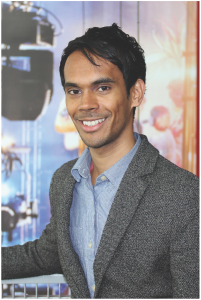 It is clear from his responses that Suba absolutely loves what he does and he confesses that a highlight of his job is seeing the reactions to shows that he has helped in development. “I make work to bring people together, so the best moment is when you see totally unexpected and varied audiences getting excited by a production. I love when you’ve been in that rehearsal room with the artists throughout the process and you see people go on this journey to places they didn’t think they would go to.”

His appreciation of Leicester clearly comes from this engagement with the people of the city: “I get to meet individuals from all sorts of backgrounds and there’s just an easy, happy multicultural vibe. Maybe it’s because my experience of Leicester is through the lens of this brilliant organisation where we bring different people together every day.”

Although he loves this multiculturalism and enjoys telling a range of stories, Suba maintains that he doesn’t set out to meet certain quotas of diversity. For him, the quality of the production always comes first, as “The big thing is that the work is brilliant, it doesn’t help anybody if you stage work that isn’t there yet just because it’s ticking this or that box.”

Finally, when asked what his favourite aspect of theatre is, he said: “What I love most is that it’s alive –you are in a room with other people and you’re all in this experience together of being moved and affected, being made to laugh or cry. When that sensation exists you feel part of a bigger picture.”

‘Flight’ for your rights!