Before settling as a full-time writer, M.P. Wright, who was born and bred in Syston, Leicester, had a diverse work history. After finishing his A-levels, he worked within the music industry until the autumn of 1989 when he retrained for a role in the mental health sector, after which he moved on to the Leicestershire and Rutland probation service.

Throughout his varied career, Wright also had another passion, but as the author and father of two reveals, his writing journey was a little more unconventional: “Like the wonderful Leicester writer, Sue Townsend, I wrote in secret. Neither family nor my loved ones, work colleagues or friends ever knew that I put pen to paper on a very regular basis. It came as a great shock to my parents when they first found out that I was writing my first novel.”

Wright’s novel, Heartman (2014) was the first of four books in the JT Ellington series. All Through the Night (2016), Restless Coffins (2018) and A Sinner’s Prayer (2019) followed. The Bristol-based crime series follows the life and events of West Indian ex-policeman and reluctant private detective, Joseph ‘JT’ Tremaine Ellington. The author shares what he learnt whilst conducting research for the novels:

“My books delve into the cruel and dark world of racism in the UK in the 1960’s and 70’s. During interview with members of the Black and Caribbean communities here in Leicester, Birmingham, London and St Pauls, Bristol, where the Ellington books are set, the stories of bigotry, cruelty and racist attitudes never surprised me, they did however deeply sadden me.

“Those who bravely recounted their experiences to me, were heroic beyond words. Their stories of coming to a new country, sometimes alone, with the ‘made-up’ promise that the streets were paved with gold and a warm welcome to all were chilling to listen to. I have nothing but respect and admiration for the Windrush generation and those that followed. The way that many of that generation have been treated recently by our government and Home Office is nothing short of shameful.” 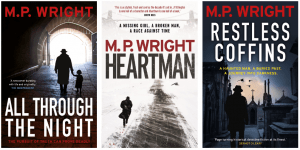 ‘Page turning historical detective fiction at its finest.’ ‘This is terrific crime fiction – evocative, socially aware and gripping – and JT Ellington is a compelling protagonist.’

‘A newcomer bursting with life and originality.’ These are just a handful of the positive reviews from readers and reviewers, but if it wasn’t for Mark’s supportive wife Jen, the JT Ellington series may have never been published: “Fans of the series, really do owe her a debt of thanks. If Jen had not spurred me on to come out of the shadows and say, “I am a writer,” the debut novel and subsequent books would never have been written. I’m sure of it.”

An avid ‘noir’ crime fiction reader, Wright is inspired by the likes of Dashiell Hammett, Ross MacDonald, Raymond Chandler and James Lee Burke, who in turn have sparked ideas for his own novels.

Life as a full-time author takes dedication and meticulous planning as the author openly shares when asked about his writing process: “I begin work as early as possible. Generally, around 8:45am. Our dog, Dylan has been walked. Home is clean and tidy and I know what we are having for supper – then it’s off to the desk and I lose myself in another world.

“I like to write at least 5,000 words plus each day, which get line edited and placed into the completed manuscript. A book should take no longer than a season to write, say three months, max. Any longer and the story takes on a strange stale feel, the characters lose their feeling of being real in my head. It’s a very disciplined work ethic a professional writer must have if a novel is to be completed. You have to be tough on yourself.

Deadlines are very real; my literary agent gets very annoyed if I slack off.” Having built a solid and supportive fanbase from the JT Ellington series, Wright reveals what he hopes his readers take away from the books: “Fans of the novels have fallen in love with JT, Vic, Loretta etc. It’s a wonderful thing to receive an email or social media message from say New Zealand or Romania, from a reader who has read your work and loves the characters and stories. It’s the best thing ever for a writer to get that response.

“I consider myself to be very privileged to have received such a great deal of positive comments from readers. I hope that they take away the underlying feeling of the importance of family and loyalty from the novels, that good and decency overcome, and that the bleak face of racism can be fought against and likewise overcome.”

Fortunately for fans of the novels, the JT Ellington series has caught the attention of a production company: “The Ellington novels are with TV. That’s as much as I can say at the moment, but we hope to have exciting news later this spring. I have no preconceptions on casting. Ideally, I’d like to see a diverse creative talent bring Ellington to the small screen. The books feature a large Black cast. I want the production to reflect this fact both on-screen and off.”

Although the future is looking bright for his crime series, Wright hasn’t become complacent and is currently hard at work on his next projects: “I’m writing a new novel at the moment; Behind Us Only Grey. It’s set in the near future and is about a very different Britain than we have today. I also have a new crime novel to complete in 2020. I write screenplays for TV too.”