At 83, musician Chandu Mattani has been singing and promoting Indian classical music for as long as he can remember. Despite his age, he is still able to hold a perfect pitch and continues to pave the way for Indian classical, contemporary, folk and devotional music.

Born in 1934, in Kutch-Mandvi, in the Western State of Gujarat, Chandu developed a passion for Indian classical music from a young age. He performed in numerous concerts whilst at school and attended evening music sessions with his friends.

At the age of 19, Chandu moved to Africa. There, he met many artists and put his sentiment for Indian classical music to good practice and became recognised for his promotion of south Indian culture and heritage. He was also able to develop his craft whilst touring Indian communities of the east and central African states: “I had a wonderful life in Africa and there was no violence or political problems in Zambia, I was extremely lucky.” 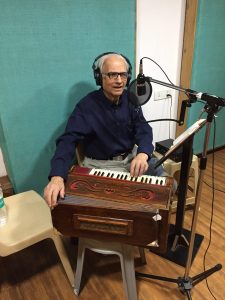 For the sake of his children’s education, Chandu made the decision to move to the UK where he and his family settled in the multi-cultural city of Leicester in 1977. With years of musical experience under his belt, it was here that two exciting business ventures were born. Established in 1983, Shruti Arts was formed by Chandu and his friends as a way of publicising the very best of South Asian music and performing arts in Leicestershire and beyond. It has celebrated artists such as Pandit Shivkumar Sharma, Lata Mangeshkar and Ustad Bismillah Khan amongst others: “When I first moved to Leicester, very few artists were coming to the city; the majority of them were going to London. Shruti Arts was our way of enticing those artists to perform in Leicester.”

Chandu and his wife Kamla also established themselves in ethnic fashion and opened Sona Rupa. Since its humble beginning back in the 80’s, Sona Rupa has developed and evolved over the years and merged fashion with music and is renowned for selling relaxation, meditation and yoga music and its website holds a worldwide presence. Under the music label, Chandu has recorded eight albums and his latest Jeevan Utsav (life celebration) was released in September 2017.

Chandu has worked with an abundance of people and renowned artists and he’s also performed in front of Lord Richard and Sir David Attenborough. “Although there’s so many, I would have to say that my highlights have been meeting people like Lata Mangeshkar known as the Nightingale of India and on my 60th birthday, I received some devotional songs written by a close friend which were composed and turned into an album. Now I’m 83 and I feel that God has given me more than I deserve.”